Following on from The Division 1.1 patch that was launched on all platforms hours ago, we can see that there are other problems being reported by gamers aside from the one we told you about yesterday regarding the Falcon Lost Incursion not being able to start.

Now we can see that hundreds of gamers are complaining about their The Division character lost on Xbox One after the 1.1 patch. It sounds unbelievable, but many players have had their character on division completely wiped and it looks like Ubisoft have a big problem on their hands.

You can see Ubisoft’s official statement on the matter below, which confirms that the recent hotfix wasn’t able to fix the character loss issue and that the developer would need more time to ‘investigate’. 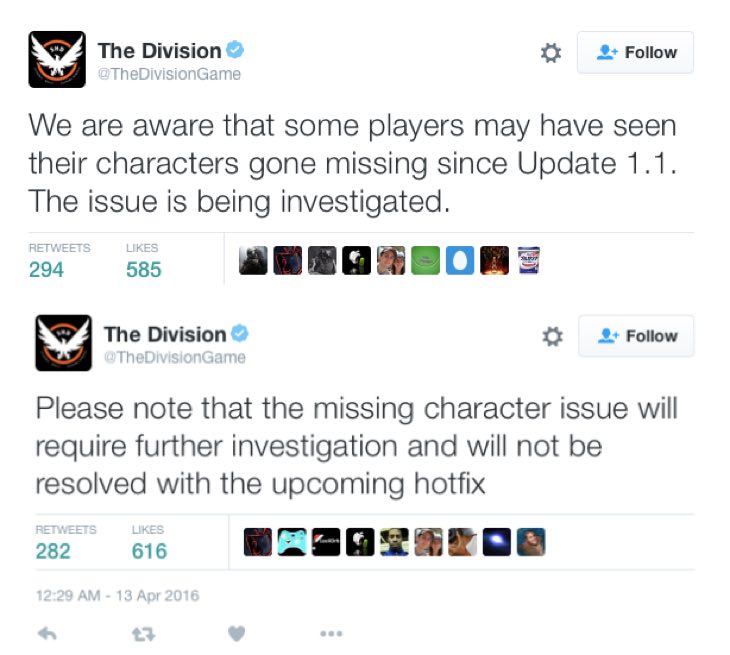 Meanwhile over on Reddit, hundreds of gamers are also complaining about the same problem in a thread there that has gained mass popularity over the last 12 hours.

The good news is that Ubisoft Massive replied to that thread, asking anyone affected to leave their Xbox gamertag so that Massive could personally investigate and find out what’s going on.

It’s obviously a serious matter though and we just hope that most of you can get your characters back – we’ve seen threats on Twitter saying that if the character is lost for good, they’ll quit the game.

Leave us a comment below if your character was also wiped after The Division 1.1 update – have you been contacted by Ubisoft with a fix yet?