On Monday Apple revealed iOS 5 to the world during its annual WWDC keynote, according to a recent tweet by a Dev Team hacker the new OS version has already been jailbroken.

The Dev Team hacker “MuscleNerd” recently tweeted “iOS5 jailbroken on ipt4g: http://is.gd/7GxIcK http://is.gd/BwPvfh via limera1n + tethered boot..not too many surprises :)”, the tweet came less than 24 hours after the keynote which is a little embarrassing for Apple. iOS 5 has not yet gone public so perhaps Apple will combat that jailbreak before its release this fall, but we doubt it. You can see the tweet here.

At the moment you need to have your computer connected to a computer for it to boot, however MuscleNerd has said that they are still working on the final release version of the jailbreak, this should mean that as soon as iOS 5 goes public a jailbreak will already exist.

We have embedded one image below which clearly shows Cydia running an iOS 5-based iPod Touch (fourth generation), there has been no mention of an iPad or iPhone jailbreak, but with months until the proper iOS 5 release hackers have plenty of time.

As we hear more about iOS 5 jailbreaks we will keep you posted, if you use Twitter you may want to follow MuscleNerd via this link for all of the latest info. 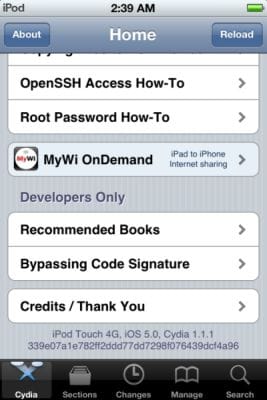