Some of you may not have ever heard of the nHD Pico, which is probably why the developers of it at Texas Instruments were seen in Barcelona at the ongoing MWC. They were showing off their tiniest, thinnest optical engine so far once again.

The nHD Pico is a chip so tiny that you could fit it inside almost anything from tablets, phones as small projectors. It runs on a Pico DPP2601/2607 ASIC processor which is low powered and comprises of a greater than 1,000:1 contrast ratio, a 640×360 resolution and a true RGB LED wide color gamut.

Engadget report that Texas Instruments were modeling the nHD Pico using their newest launched device the Acer C20, with representatives onsite saying the chipset was included in other manufacturers plans also. This device can be seen over at Engadget. 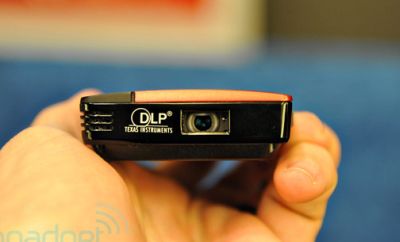 The chip was also shown off in a Pico projector, a tiny hand-held device powered through USB, requiring no battery. However Engadget say that representatives were reluctant to say who would be prepared to brand and ship their version of this cute little device.

In other related news, TI has also announced their improved Digital Signal Processor DSP, at the MWC. The C66x DSP is said to surpass performance of others in the industry with its 1.5GHz speed. TI say their C66x DSP is a ‘major breakthrough’ and is just a sample of what they intend to deliver to customers over the next year and a half.

What do you think of the tiny nHD Pico? Does it represent the future of image projection?