No matter how many people or organizations are against Tesla, there seems to be no stopping the Model S, as it has won the hearts of consumers, and as such is intent on keep winning awards. The 19th annual Total Quality Index has been announced and the Tesla Model S has taken the top TQI award for the best model.

These results show that drivers have not been put off by some of the negative comments being made, and proves that people are not easily put off and just shows these individuals and organizations really do have something to worry about and should start to look closer to home rather than vent frustration out on the likes of Tesla.

As always there are a multitude of awards to be won, and Kia, Audi, and Jaguar ended up taking a few awards. The Kia Soul won Small Multi-Function Car along with the Volkswagen Golf, and the Kia Optima won the mid-size car award. 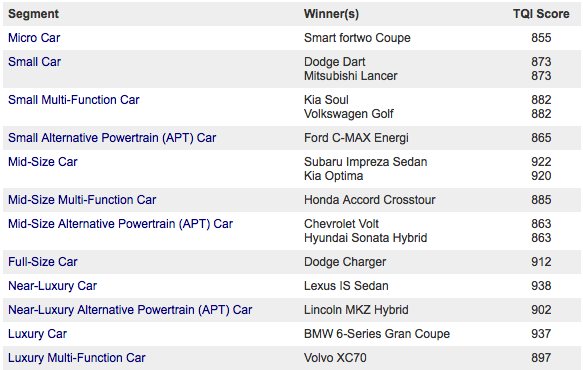 Audi managed to take three awards, those were the Audi A5 Coupe for Premium Economy, Audi Q5 for Near-Luxury utility and the Q7 for Luxury CUV. They also shared leadership as the best Luxury brands with Jaguar.

A full list of Total Quality winners can be found here, which was the result of a study taken from 38,361 owners. Please pay close attention to the list of winners and let us know if you agree with the results, and if not, then what model should have won?