Ever wanted to be able to pick up and inspect a product while browsing online, well now you virtually can thanks to a new trial that UK supermarket giant Tesco is holding. They have just begun testing the use of augmented reality technology to show products to their customers in order to help them preview them.

The use of AR technology also gets round the problem that the company sometimes has of not being able to display all their products from every range. As The Inquirer explains, 3D rendered models of the products will be able to be viewed instead so a customer can get a clear perspective of what they are after. This model can be manipulated any which way the wish as if they were actually holding the product.

The trial will be run in only six different Tesco Extra stores. These are located in New Malden, Hatfield, Cheshunt, Milton Keynes Kingston, Borehamwood and Wembley and will remain there at least until the end of the year. Weekly reviews will provide the company with feedback and will give them an idea of how much the technology is in demand.

The way in which the system works is customers must print out an AR card or marker and hold it up to a webcam. The selected product is then showed on the screen where the AR card is. For the moment the technology is limited to only a certain amount of products, such as DVDs, games, Lego models and Samsung TVs, as it’s just a trial run. The technology is provided by Kishino and makes Tesco the only supermarket in the world to integrate its use.

Would you like to see the use of augmented technology become more permanent in supermarket use? 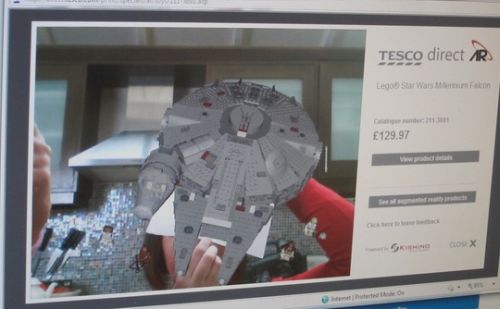