Terra Battle is an amazing game and is proving to be very popular as we can see with the amount of downloads so far. Unfortunately though, some individuals are threatening to ruin this experience as we can see that there is already a Terra Battle hack download on iOS and Android that is available right now.

This hack claims to offer unlimited Terra Battle energy and coins, which most of you know are the bread and butter of the game. Coins are needed for jobs and non-rare recruits, while energy is the premium currency for the game.

Take a look at the screenshot which we have discovered, showing evidence of the program that can give other players 999999 coins and energy. It also offers all items in the game, essentially meaning that you have instant access to all SS characters in Terra Battle and the items and coins needed to get every SS character to Job 3. 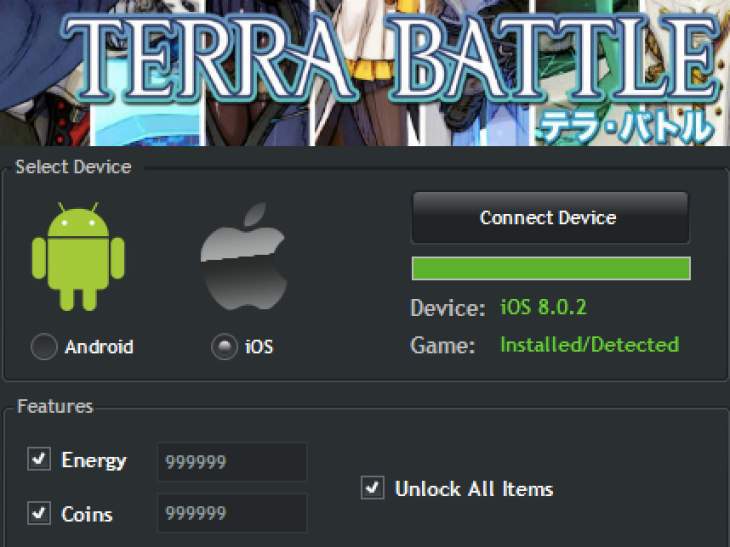 Some of you may be thinking why this is relevant on a single-player game. However, we need to remind you that Terra Battle Vs mode is on the way very soon. We are already closing in on 900,000 downloads and once the figure passes 1 million, development is going to start on Vs battles.

Mistwalker has already said that Vs mode is going to use Bluetooth technology to allow players to battle each other locally. However if you are in a public environment with lots of players, you are not going to be able to tell who has a legitimate team of SS characters and an overpowered team which they acquired by using Terra Battle cheats.

As a result, this is something Mistwalker needs to keep an eye on carefully as it could escalate rather quickly as players look for an easy way to obtain free Terra Battle energy.

Are you shocked that there is already a hack available for Terra Battle, just days after launch? What do you say to those that spend 12 hours of their day re-rolling for SS characters and those that are willing to try this hack out to shorten the time needed to grind?