Terra Battle is continuing to be a social addiction since launch and now we can see that Mistwalker has a few tricks up their sleeve to keep players interested. While we are all waiting for the Bahamut event to begin, we can see that there is a Terra Battle Ethereal code from Famitsu which is now up for grabs.

As players will know, the game features a gift code system, in which players can freely head to the options menu and input a special code for a gift. As we told you here this could be for free energy, but now we know that it can offer free characters as well.

Ethereal is a new A-ranked character who comes with abilities such as Megaspear, Debilitate, Defense Raise and Gigaspear. We can actually show you the in-game stats for this character. 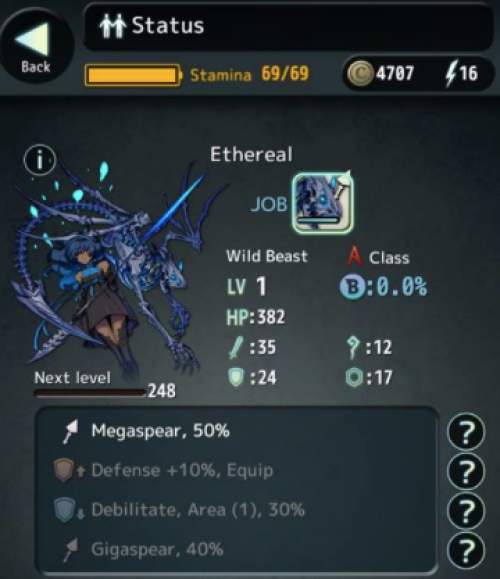 Now the only way to get hold of this exclusive character, is by getting hold of the latest issue of Japanese magazine Famitsu. The November issue contains a code, which is one-time only per issue that will grant you Ethereal – meaning that the code cannot be used multiple times like the 5-energy code.

With this in mind, you should be prepared to spend around $4 USD for the Famitsu issue if you want to get hold of Ethereal. She looks like a fairly decent character so perhaps it is well worth the entry fee.

Have you managed to obtain this code, or are you still looking for one? Let us know if you have already unlocked this Terra Battle DLC character and what you think of her design and abilities.