It looks like there is some new content on the way to Terra Battle. Those who continue to play the game in a way that isn’t supported by the developers have uncovered evidence suggesting that a new character called Blade Falcon will arrive in the game.

Mistwalker hasn’t announced the news in English yet, but we can see that the information is already official in Japan. The next issue of Japanese publication Famitsu is once again going to include a code, in which you can then enter on the game to receive the character Blade Falcon.

This is the exact method in which players managed to obtain Ethereal and it looks to be a pattern that Mistwalker intends to follow with future content releases. 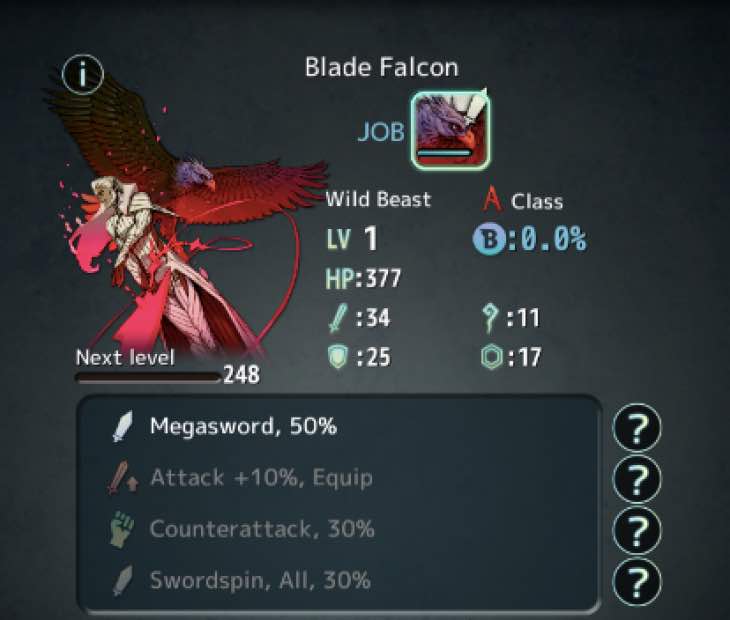 Since that news broke in Japan regarding the Famitsu App No 19 Terra Battle gift code, we have since discovered that information on Blade Falcon is available in English. There are players that continue to modify the game’s files away from Mistwalker’s wishes and against the terms and conditions of the game – it’s due to this that the image contained above shows the complete move list of Blade Falcon.

It’s another A Class character like Ethereal, but the big attraction is that this card comes with the special ability ‘Swordspin’. This skill has the ability to trigger at any time whilst chained, with the move itself hitting all targets on the grid – similar in the mould of Gugba’s avalanche we expect.

As a result, this character may be popular when playing on Terra Battle’s Metal Zones to level up players much more quickly than through story mode.

While we don’t condone those who persist in using Terra Battle hacks, it is good to see that Mistwalker are keeping the new content frequent for players who may have already finished the story chapters.

Translating Famitsu’s article from Japanese, we can also tell you that Blade Falcon will be available from November 20 – i.e. tomorrow, to February 17 2015.

At this point, there is no information suggesting that a Western release for this character will apply to those dates as well – it may be a Japan timed-exclusive for all we know.