Mistwalker has just released the Terra Battle 2.5.0 update and if you play this game regularly, you’ll need to know that there’s some major changes to the co-op system in the game.

Previously, when you played co-op all three players would receive coins, items and exp but we can tell you that this is changing. With the latest update, only the host will receive the coins and exp so it means that the second and third guest players will only receive items from now on.

This is a needed change in the game, as there has been an increase in the amount of users who have nothing better to do, but to create multiple accounts for the game.

They then take these accounts and host co-op matches themselves, thus building up an unlimited supply of coins and exp between the accounts. 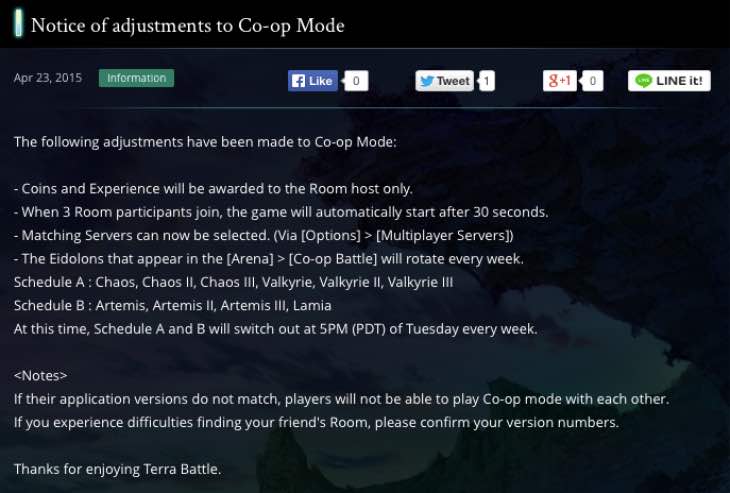 Mistwalker has decided to take action on this and although legit players may feel aggrieved by the change – there’s still plenty of other ways to generate coins and exp in the game.

It is not a race towards the finish line after all and we are happy that Mistwalker is taking new steps to eliminate any foul play in the game moving forward.

Take a look at the Terra Battle 2.5.0 update notes for Co-Op specifically above and let us know what you think if you are a player. Remember, it’s not the full notes as these will come at a later date once the update has rolled out to all regions.