We can immediately tell you that this looks to be a great update judging on first impressions. Mistwalker has introduced several tweaks to gameplay which we think you will be pleased about.

Notably, Metal Zone’s 2 and 3 will now have a two round cool down before enemies start to move, allowing you to gain a lot more experience points for your team members who badly need levelling up. 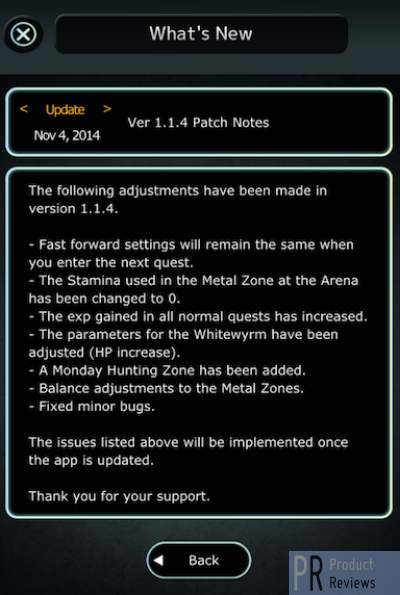 The full patch notes are above and it also includes a brand new Terra Battle Monday Hunting Zone. Since Monday has passed though, we are yet to find out what that means, but it’s great news nevertheless.

We have also noticed that it appears somewhat easier to perform ‘diagonal’ moves on the grid, following on from the 1.1.4 update. Perhaps we need to investigate this one more, but let us know what you think about this.

Mistwalker has also increased the EXP gained from all story missions which is another great change to the game. Hopefully you’ll be able to level up your squad a lot quicker now, as most of you who play will know how hard a task it is getting so many characters to a high level.

What else have you noticed on the Terra Battle 1.1.4 update on iOS and Android?