We have some good news for those playing Terra Battle on iOS or Android, as a new Terra Battle 1.1.3 update has just gone live. This was a planned update if you didn’t know, with Mistwalker making some balance changes to one of the characters who they deemed to be overpowered.

The update is now available to download and we can now bring you the official Terra Battle 1.1.3 patch notes. The change list is not long, but it does include the included balance tweak to the Regenercell healer cell.

For those that need a reminder of the balance change, Regenercell’s 4th skill has been changed from the Magic Attack +50% to Magic Attack +20% as of the 1.13 update. 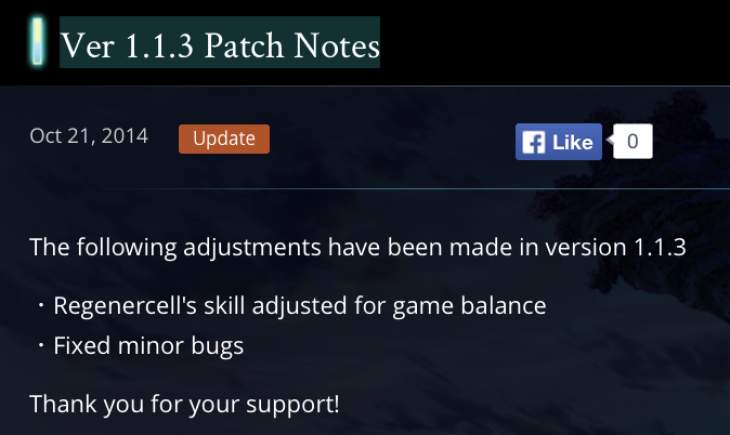 Other than some minor bug fixes, there are no new features to report. It is worth mentioning that those of you who have been using Regenercell already, are in line for some compensation from the developer – we’re assuming this to be some coin or energy drops inside a personal message or gift code.

As we told you earlier this week, the Terra Battle Bahamut event is on the way this Friday, so there’s plenty of content still being added to the game.

Terra Battle has also passed 800,000 downloads on the ongoing counter so players could be receiving the free Terra Battle soundtrack once the ticker passes 900k.

What have you noticed on the new 1.1.3 patch? Initially you may have had a problem with the update not available from the App Store, despite an in-game pop-up telling you to update.

This has now been fixed though, so let us know your game experience at the moment.