A new iOS tennis game has just been released which combines the game of tennis with social networking. Tennis Flirt 1.0 features Game Center with internet based multi-player gaming and voice chat.

Released by Personal Applets Corporation, the game allows users to socialize and chat with their tennis partner and much more. Players can make new friends and meet others who share an interest in the game. You can even give and receive smiley rewards which count towards your achievements.

There are two game modes to choose from; open tennis and bounce tennis. You can also play on your own to improve your skills, and play with somebody from your friend list. You can also be more daring and get connected to a random player who can be male or female. 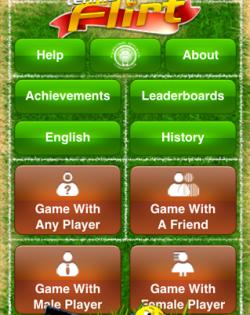 Tennis Flirt has thirty two motivating achievements and three leaderboards, and you can chat to your opponent in English, German, French, Italian, Spanish, Russian, Dutch, Chinese or Japanese.

Tennis Flirt 1.0 is available worldwide on the App Store for only $0.99/£0.59. Compatible with iPhone 3GS or later and iPod Touch 2G or later with iOS 4.1 or later. Check the video out below of Tennis Flirt.