It is that time again for Minecraft Pocket Edition players, as we pick out our best Minecraft PE 0.9.5 Village Seeds since Mojang has updated all players on Android and iOS to a new version.

The updates are coming thick and fast for the mobile version, but you’ll be pleased to hear that so are the new village seeds that are dying for some feedback from the community.

This time, we can bring you the newest top ten Minecraft Village seeds that will run on the newest 0.9.5 build that Mojang released recently. There’s a great selection available, catering for those that just want to see massive seeds with multiple villages, to those that are looking for some special extras such as blacksmith tools.

Without further ado, we bring you the top ten Minecraft village seeds on 0.9.5 courtesy of YouTube user Glowific. The best part about these seeds are that players will spawn right next to the villages, while there’s great variety as well for those that are looking for extra content on top. 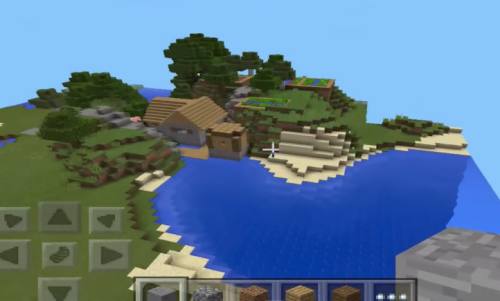 Here are the seeds, as well as our descriptions which will give you an idea of the main features before you start entering the details in.

Seed 1) Mooshroom – Two villages with blacksmith
Seed 2) 1405023677 – Spawn right next to village.
Seed 3) Render – A double village with river theme and blacksmith
Seed 4) Detailed – Directly spawn inside the village with a nearby chest.
Seed 5) Superpig – A massive seed which we featured already in a previous article here
Seed 6) 65603 – A water-themed village that spawns inside the water
Seed 8) 805967637 – A great village with a hidden stronghold
Seed 9) 1405630280 – Another massive village which spawns in the water
Seed 10) 1405058635 – Triple village, including a massive sand village with two blacksmiths.

From what we see, it looks like Seed 10 is going to be the best one for you in terms of variety – either that or the Superpig seed which remains very popular among the community.

Try them out now and let us know what you think. Once again, feel free to leave your own seeds and descriptions if you think you can offer something better for players than the 10 listed here. Remember that Minecraft PE 0.10.0 is on the horizon, which will finally add player skins!