Forget Angry Birds, that was so 2001. The new craze that is sweeping mobile gamers is Temple Run and users are frantically trying to rack up high scores on the iOS version of the game, and one notable user includes none other than Wayne Rooney.

If you aren’t familiar with the game, players will have to keep running for as long as they can, initiating swift turns and avoiding obstacles as they do so. The further you last, the more points you’ll rack up.

The game has now become one of the most popular games on the App Store, and Android users are waiting patiently for Imangi Studios to put a version of the game on the Android Market as well. We’ve found out that Wayne Rooney is a big fan of the game, and he has used his personal Twitter account to reveal that his current high score on the game is a whopping 12.5 million points. There’s a screenshot below which he posted as proof.

As you can imagine, he is pretty pleased about his score and he has boosted about it to his Manchester United teammates asking them to try and beat it. The obvious question that we want to know is, have you got close to Wayne Rooney’s score or not?

One word of caution for Android users though, as we mentioned in an earlier report this week that there’s a few fake Temple Run apps appearing on the Android Market. Try to stay clear of those as Imangi Studios will obviously tell the world the moment their Android app goes live. As for the iOS app, it really is great fun if you haven’t tried it and best of all, the developers have now made it a free game after initially charging $0.99 for it.

Are you any good at Temple Run and have you managed to beat Wayne Rooney’s score of 12.5 million? 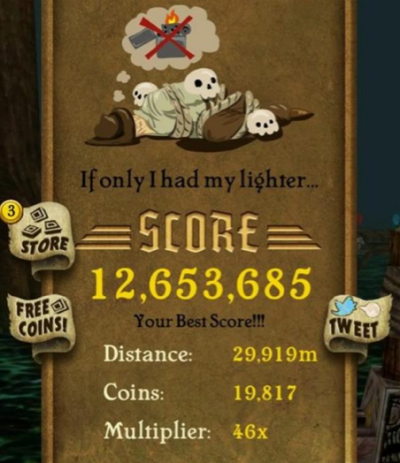