Earlier today one of our colleagues on Product-reviews had a warning message appear on his iPhone 4. The display had a huge message that said “Temperature’, with a further message under the standard yellow warning sign saying, “iPhone needs to cool down before you can use it.”

The strange thing is, the phone was cold at the time. When he tried to make a call the phone said that he could make emergency calls only, which appeared in different languages. He then decided to look on a few forums to see if this has happened before, and was surprised that it has been an issue with all version of the iPhone. 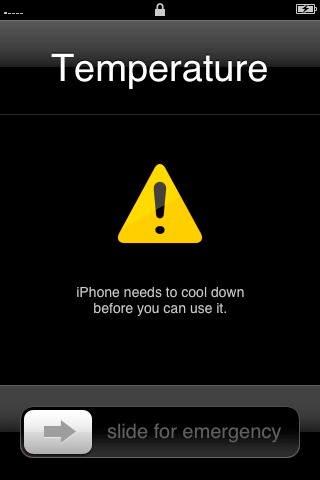 Thankfully after a minute the warning message had disappeared and the iPhone 4 was back to normal once again. We will now have to wait and see if this message reappears, if it does then it will have to be either a call to Apple or a 60-mile trip to the nearest Apple Store.

I would be interested to know if you have experienced this same issue, and how many times had it appeared? I have not had this issue, but I have got a message that said that I had “No SIM installed”. This has not happened in a while, so do not understand why that is.