It has been a very long time since we last heard any details about the highly anticipated Tekken Tag Tournament 2 game, but we’re hoping this latest bit of info is the first of many more details to follow.

The game has been featured in the latest edition of Famitsu, and has been translated by the good guys over at AndriaSang. The latest news is that the game will feature a ‘stage gimmick’ system, which will allow players to use the environments to greater affect – as similarly seen in previous Tekken games.

In Tekken Tag 2 for example, players will be able to beat opponents against walls or objects featured in a particular map, and enough damage will result in a breakage of the wall or object, causing both players to fall into a new section of a map where play (and combos if you’re good enough) will continue.

Furthermore, we’re also hearing that the game will allow players to equip ‘weapons’, such as a bat or ‘hammer head’ to inflict even more damage on an opponent – sounds interesting but we hope the developers don’t over do this particular aspect. 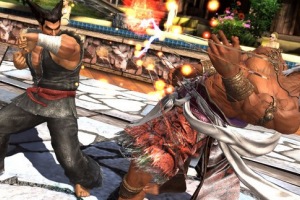 Hopefully we’ll have more news for you soon, and a confirmation on when the game will release on home consoles, since it remains a Japanese arcade release only at the moment.

Are you looking forward to some fresh Tekken Tag action? We definitely are. If you are looking for the latest screenshots for the game, you can check out a great gallery courtesy of Famitsu here – which includes a first look at the younger Heihachi Mishima if you haven’t seen him before.