We’ve updated this article to reflect that the Boxing Day sales for both Tesco and Currys have now gone live, along with many other retailers in the UK offering stock clearance deals to millions of shoppers both online and in-store.

Original Article: Most online retailers want to get one-up on their competitors and releasing timely offers is one way to do this, as such it isn’t a surprise to see Currys and Tesco teasing their Boxing Day Sales for 2016 already! While Currys hasn’t specifically mentioned Boxing Day in their current promotion, they have launched a massive 50% off sale and explained “more deals coming soon”, which naturally mean in the lead-up to Boxing Day.

Tesco on the other hand haven’t held back, they have gone all out and released their Boxing Day Deals earlier than most other online retailers. In fact, the Tesco Boxing Day sale started on 23rd December and ends on the 28th.

It surprises us how these sales seem to arrive earlier every year, although it’s worth noting that the deals could get better when Boxing Day arrives with extra discounts and more products added to the current promotions.

Feel free to take a look at the current Currys online sale that’s almost certainly their Boxing Day deals here at Currys. Look for more offers to be added on Christmas evening, or in the Day After Christmas Day Sales. It’s worth pointing out that most retailers watch what their competitors do, as such changing promotions and expanding offerings dependent on what others deliver. 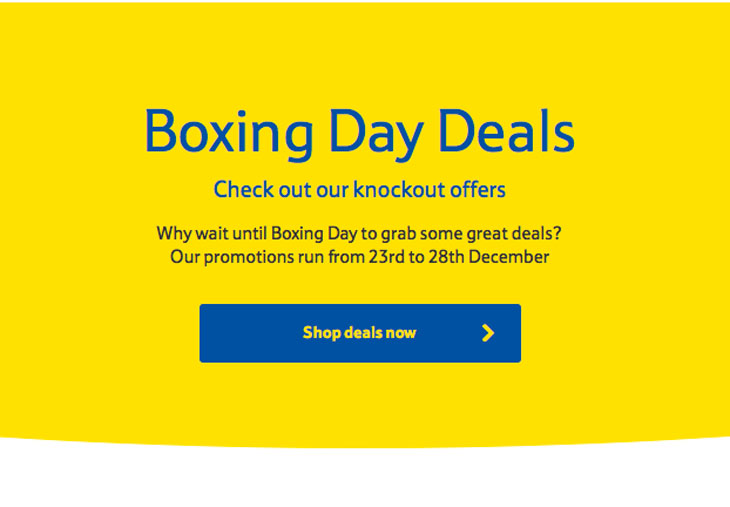 Currys and Tesco Boxing Day Sales in-store – You will find both store locators for Tesco and Currys, which detail the exact opening times for each store. We have been told directly that both retailers will be opening early with their Boxing Day sales, but check the online store locators for exact times.

We’ll post news early next year that details how well each retailer performed, on what’s expected to be the biggest shopping day in the UK once again.