A recent ruling by the ASA to ban a TalkTalk broadband advert has been viewed by the company as a positive despite the fact that they can no longer use the publication. After a complaint was made by BT that suggested false advertising infringements by TalkTalk, the ASA ruled that three of their ads should be banned as they had used the term ‘UK’s safest broadband’ very loosely.

Tele communications giants BT as well as two other companies were quick to question the term which got the national press, poster and TV commercials banned, yet TalkTalk are seemingly delighted with the outcome. After trying to defend their case for using the term, arguing that it was based on them being the only home UK broadband provider that supplies network level security features, they were overruled by the ASA who feel the term refers to ‘the safest online experience’ rather than the highest network security.

To everyone’s surprise however the company has come out gleaming as they believe the ASA has done them a favor and confirmed ‘once and for all, that TalkTalk offers the UK’s safest broadband connection.’ They claim that all they have to do in future advertising is emphasize the network aspect to avoid them being in the wrong. This is why the company views the ruling as a victory.

Of course BT had nothing further to argue as they had actually won their case against TalkTalk and got the adverts banned, although the confirmation that the company does provide the safest broadband could not have been foreseen and may in fact have worked against them. Check out the Guardian for more details on the ban.

What do you think of this ruling? Is it a victory for BT or TalkTalk? 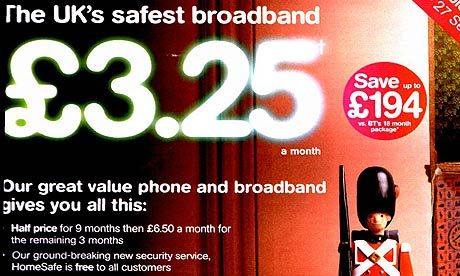