This year at Comic Con 2013 saw the unveiling of new mobile tablet technology, which will soon hit the market in the coming year. Products ranging from games designed for the various tablet devices, Bluetooth pens, motion comics, to the latest tablet devices for your purchasing pleasure. Each of these products was received with varying degrees of success, as you will see by clicking on the video below this article.

The company Fincon have developed a new free-to-play mobile RPG game called “Hello Hero”. First impressions of the game seem to be mostly positive and signal the innovative creative capacity that mobile technology is progressing towards. The colourful game comes with a large selection of potential hero characters, brilliant 3D graphics, and the function of multiplayer capability that will mean you and your friends can tackle a tricky boss battles together. The game will be hosted upon a multitude of platforms including the iOS, Android, and Facebook.

At the Wacom booth at Comic Con, they displayed their new tablet device focused upon touch sensitivity with Bluetooth pens called ‘Cintiq Companion Windows 8 tablet”, which comes with a Core i7 processor, 8GB of RAM, Windows 8, and the full Adobe Creative Cloud. 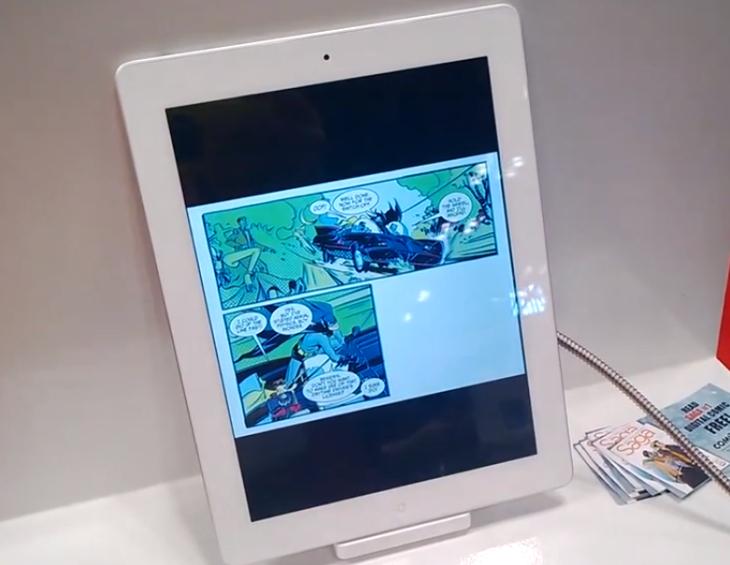 The tablet seems to be geared towards people interested in graphic design, or people who are generally interested creative technology. The tablet is rather large in comparison to its competitors, but that allows you a greater surface area to work your magic in creating cool and funky designs. The pressure sensitivity of the Bluetooth pen upon the tablet works really well and even has stylus tilt technology. The Bluetooth pen for this device is remarkably better than the same kind of Bluetooth pen that Wacom developed for the iPad which does not seem to work at the same standard as the one for Cintiq Companion Windows 8 tablet. Perhaps this is merely some teething pains, that will eventually be ironed out when the product comes to market.

The Verizon booth also displayed some very interesting products. The most fascinating item shown, which will certainly appeal to all comic book fans around the world is the ‘motion comic’ app. Verizon has taken the much loved comic book genre and transformed the comic into something that closely resembles a movie. This is a fun new addition in the comic book world and it would be interesting to see the scope this product has in revolutionizing a much loved genre of writing through the medium of tablet technology.

What do you the people think about the advances in tablet technology? Are you excited about the new innovative technology that is about to hit the market? And what do you think this means for the traditional PCs and laptops; do you think that the tablet devices will eventually overtake their older competitors?