You have to admire it when companies release a new promotional campaign that takes advantage of a huge movie release, and this is just what T-Mobile are offering their customers. One of the biggest, and anticipated movies of the year has to be Suicide Squad, which is being released on August 5, 2016. As a way to help celebrate this movie is the new T-Mobile Tuesdays deals for August 2.

This means that for those of you wondering what the next T-Mobile Tuesdays was all about, then all you need to know is that all the gifts revolve around Suicide Squad, so if you are a loyal customer and a fan of the DC Comics franchise, then you are going to love tomorrow’s offers.

There are so many gifts to choose from, although the first is a free ticket to see the Suicide Squad movie on its opening day, August 5. The way this will be offered to you is by way of a free $13 Fandango credit that you can only use to go and see Suicide Squad. 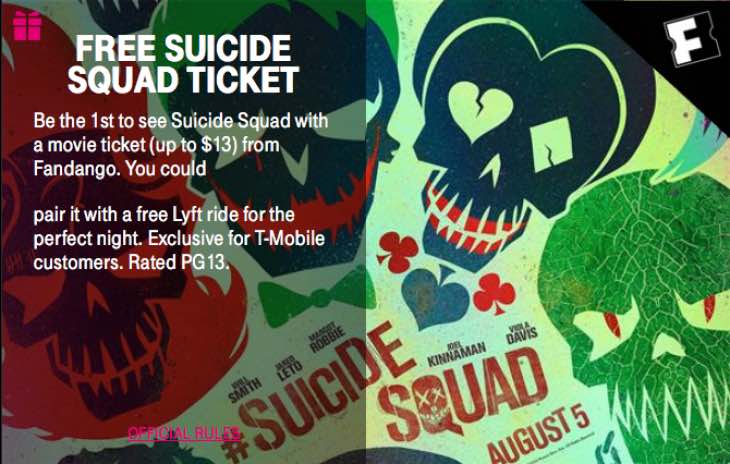 Other gifts include the chance to win one of 50 Harley Quinn’s baseball bats. There are also Suicide Squad poster and Carrera sunglasses, along with Batman v Superman: Dawn of Justice DVD, $15 Lyft credit, and unlimited Pokemon Go data.

However, the biggest prize is the chance to win a VIP trip to Warner Bros. This also comes with return flights, and a three-night stay in a hotel. Full details can be found on the T-Mobile website. Having said that you could also download the Android and iOS apps on their respective app stores.