It has now been over a year since the Motorola CLIQ / DEXT was released, therefore it is nice to hear that Motorola have a successor planned, this is the aptly named CLIQ 2.

As you would expect details are understandably scarce at the moment, however we do have some photos for you to check out, these are said to be the first-ever CLIQ 2 shots and come courtesy of CellPhoneSignal.com these have been embedded below. 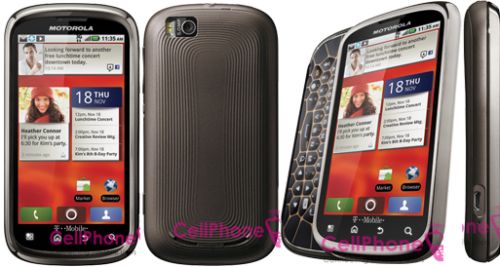 The CLIQ 2 looks like a slimmed down and refined version of the original CLIQ, we are reliably informed that it features a full slide-out QWERTY keyboard, a 5 megapixel camera with LED flash, Bluetooth 2.1 + EDR, aGPS, WiFi b/g/n and a new improved version of Motorola’s popular UI aka MotoBlur.

It is thought that the Motorola Cliq 2 will be officially announced at CES 2011, hopefully then we will know more about its performance hardware and Android OS version, I would imagine that it will run Android 2.2 FroYo out of the box.

It is thought that this smartphone will become available in late January 2011, it will probably be regarded as a mid-high-end smartphone which will compete with some of HTC’s offerings, as we find out more we will keep you posted.

Do you like the look of the Motorola CLIQ 2?