There has been all sorts of release date rumors concerning one of Research In Motion’s top-near releases in the the BlackBerry Bold 9900. So far, we have only been told that it will be around August of this year, but in an apparent new leak, T-Mobile customers could be seeing this as early as the end of the month.

Although T-Mobile were one of the first carriers to confirm that they intended to add the BlackBerry Bold 9900 to their list of phones, there has been no hard indication as to what carriers would be taking this RIM device on board.

The only other slight indication of a selected carrier came at the bottom end of July, when we found some photos of a BlackBerry Bold 9930, which is the CDMA version, out in the wild sporting a Verizon splash screen. This has still yet to be confirmed, but we think we are leaning towards legitimacy than falsifiability. 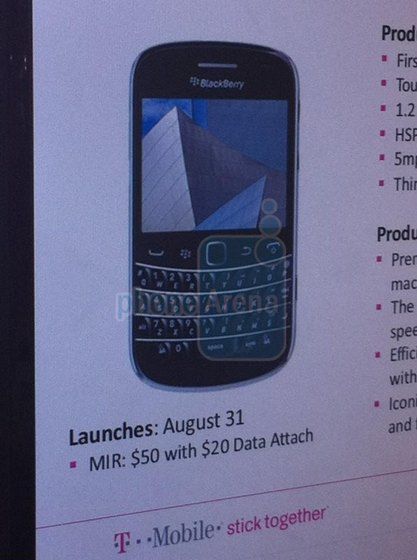 Referring back to the T-Mobile release of the BlackBerry Bold 9900, it seems as though T-Mobile have been getting started on putting out some promotional material for the device in their own stores which pretty much guarantees that you will be able to get your hands on one of these by the end of the month. In addition, the information regarding the BlackBerry 9900 also states that customers will also be able to get a $50 MIR (Mail-in-Rebate) when you opt in for a $20+ data plan, which is pretty neat. More information can be found via CrackBerry.com.

All things considering, Research In Motion still has a long way to catch up to the flagship smartphones of today. With time creeping up on the apparent release of the iPhone 5 by Apple, plus many more gripping handsets in the pipeline from HTC, Samsung and even Nokia, will the future of RIM be in the hands of the BlackBerry Torch 9860? Only time will tell.

For now though, T-Mobile customers can make do with the BlackBerry Bold 9900 as it is one of the only newer BlackBerry models available from their stores.