The LG Optimus line of cell phones is captivating their audience pretty well, we have already reported to you on how the LG Optimus U will be released on US Cellular and how it is ideal for Android Newbies. We also reported on the specs of the device, you can read them here.

If you haven’t read our previous articles then you are probably wondering what all the hype is about with this handset. Well, the LG Optimus 2X will be the first smartphone to feature the Tegra 2 from NVIDIA, this is a dual-core processor in a smartphone, which will hopefully turn the market on its head and bring a new generation of smartphone. 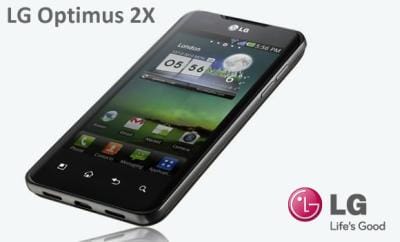 Whilst the Tegra 2 processor is perhaps the standout feature, there are a lot of others. The LG Optimus 2X has an 8 mega pixel camera that is capable of 1080p HD recording. That’s pretty impressive.

According to RCRWireless, T-Mobile are expecting the handset to be released on their network towards the end of February or start of March, you can read their full article here.

What do you think the better device will be? The LG Optimus or the Apple iPhone 4? Let us know your thoughts in the comments below.