A great original eBook has recently been released for owners of the iPhone, iPad, and iPod Touch. Sympathy For The Devil 1.2 is a story about a fallen angel who decides it’s time to find his way home.

Released by 288 Vroom LLC, the book has only been released for a few days, but has already found its way onto Apple’s ‘New and Noteworthy’ in the Books Category. The story is full of cliffhangers and mysteries which will all be revealed by the end. You will find the first seven chapters of the book free of charge, or the full version is only $0.99.

This groundbreaking story has been a lifetime in the making, and is being presented as a series. As the weeks go by new chapters will be released until the end of the book, and is not available anywhere else. All future updates are free and included with the original purchase.

Some of the features include numbered pages, selectable chapter list, pages that sound and flip like in a real book, and beautifully designed. If the story was published as a hard back it would be about 250 pages long. 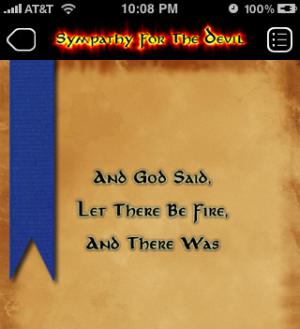 Sympathy For The Devil is available worldwide on the App Store, and the first seven chapters are free with the full version costing $0.99/£0.59. iOS 3.0 or later required.