One of the most efficient and useful gadgets ever invented has got to be the Swiss Army Knife. Its multitask capability has made it essential to groups like the Boy Scouts, as well as various professionals such as fishermen, but now the device is set to become even more useful entering the digital era as its manufacturer Victorinox unveils a 1TB SSD equipped version.

The company unveiled this magnificent invention at CES this week along with a Slim 3.0 USB drive. According to the report by BGR, it comes in various different storage models which range from 64GB to 1TB. Just like a regular Swiss Army Knife, it comes equipped with a screw driver, scissors and a blade but includes a 1TB SSD built into it. An interchangeable flight-friendly knife body is also available, making it essentially a thumb drive.

The Slim 3.0 USB drive comes with 128GB capacity and provides faster write and read speeds than the more common 2.0 USB flash drive. Neither of the two products on display from Victorinox had their price details revealed, although both are reported to be available from April 2012 onwards. CES 2012 is well underway and as the week progresses we will be doing our best to provide as much news from the event as we can so be sure to come back so you don’t miss out.

What are your thoughts on this digitalized Swiss Army Knife? 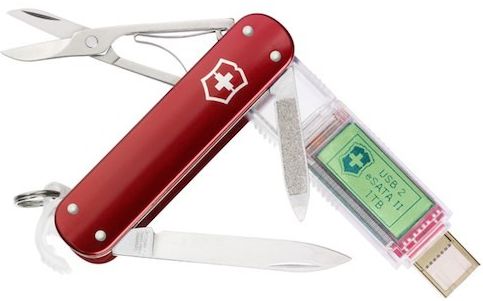