We were expecting the first batch of FIFA 15 January transfers or Winter transfers update to go live at the end of January, just as we saw last year.

However, EA has surprised everyone by putting the transfers completed so far, into FIFA 15 Ultimate Team as soon as possible. It means that the likes of Wilfried Bony, Fernando Torres and Shaqiri are now live for Man City, Atletico Madrid and Inter respectively.

EA has confirmed this on their website, by releasing a handy Google document showing all of the transfers that have been activated in the game so far. 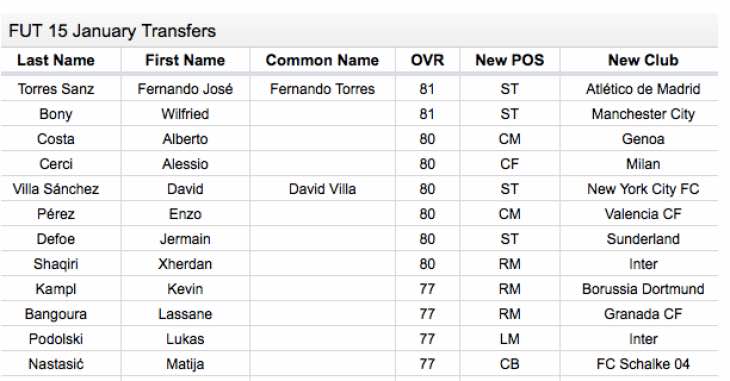 With the transfer window very much alive though, EA will be releasing batch 3 and batch 4 in the coming weeks so stay tuned for that.

We’re surprised that EA has acted so early, as usually they wait until the end of the month to push the transfers through in the game. Perhaps they are expecting tons of changes so didn’t want to waste any time – which is great to see.

One player missing from what we can see is Valdes over to Manchester United – we’re guessing that is the change that is next on EA’s to-do list, but it’s strange that they’ve missed him out.

Let us know your thoughts on this surprise update from EA – has anyone picked out any of the players at the their new clubs in gold packs yet?