The hope of a Surface mini unveil today were shot down when Microsoft revealed the new Surface Pro 3, and to rub salt in the wounds of those hoping for a smaller version, this newer model has now been made slightly larger. And, it is for this very reason why Microsoft believes that its new device will be able to take on the MacBook Air.

We can understand why Microsoft would think that a Surface Pro 3 vs. MacBook Air showdown is plausible because the former device is just $100 cheaper than the latter, whereas the iPad is $300 cheaper for is cheapest model.

The Surface lineup has struggled since its release and while the Surface Pro 2 was a bigger hit, sales still fell short, but at least Microsoft is sticking with the program and improving with each generation. However, Microsoft must realize that it is unable to take on the iPad and the Galaxy Tab range, seeing as though Microsoft only commands a 2 percent share of the tablet market. 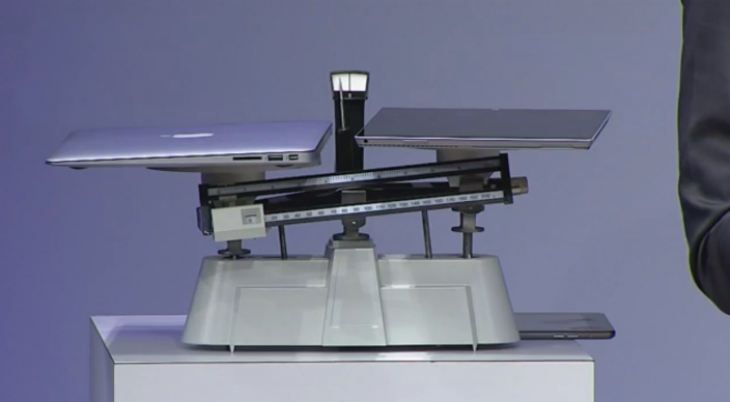 So what does the Surface Pro 3 have under its hood when compared to the 11-inch MacBook Air seeing as though it is more comparable in price? First of all there is the processor, the base model of each comes with an Intel Core i3, compared to an Intel Core i5, 4GB of RAM vs. the same amount, 64GB of storage compared to 128GB of flash storage and up to 9 hours of battery life for both devices.

When it comes to basic specs, it is clear the Air wins out, and when you start to upgrade each device to their full potential it is the Surface Pro 3 that becomes the most expensive, and so it is hard to see just how Microsoft plan to take on Apple with its MacBook Air, especially when they did so bad taking on the iPad? That’s not all, what happens if Apple releases the rumored 12-inch MacBook Air, which will be identical in size, and not doubt thinner as well?

Having said that, the MacBook Air is unable to compete with the Surface Pro 3 in several areas, such as its touchscreen, functional pen, and increased portability thanks to it being lighter.

You can see a complete rundown of the Surface Pro 3 specs here, and if you do feel as though this is the answer to the MacBook Air, then you can pre-order one from tomorrow.