We have a heads-up for those of you who have already put a purchase down for the highly anticipated Microsoft Surface Pro 3 release. Pre-order customers may be expecting their tablet to ship on June 20, but we have seen Microsoft make some subtle changes which may result in you having to wait longer for the Surface Pro 3 shipping date.

If you wanted the cheapest version of Microsoft’s newest tablet, the Surface Pro 3 64GB with an Intel i3 setup, then you will have to wait until the end of August to receive it as Microsoft could only commit to a August 31, 2014 shipping date. 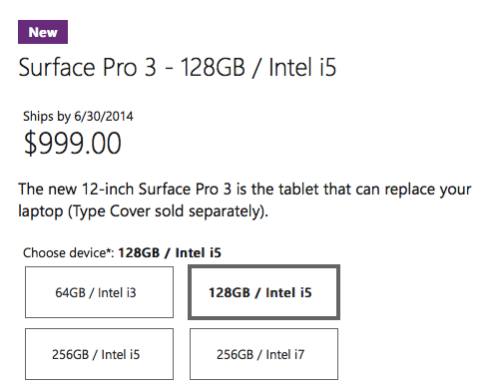 However, as of this week we have noticed that Microsoft has altered the shipping date of their 128GB Intel i5 model. Instead of a June 20 shipping date as originally intended, we can now see that this has changed to June 30.

The 256GB model which costs $1299 is still unaffected fortunately and should still ship to consumers on June 20 as originally planned. It’s not great news for those that opted for the 128GB version though, especially so close to the planned delivery schedule.

Which model did you pre-order from Microsoft? Have you received any shipping notification from the company on when you will be receiving your Surface Pro 3 tablet?