For those of you planning to pick up Capcom’s Super Street Fighter IV on either the Xbox 360 or PS3, we have some HD screenshots to show you now, comparing the differences between the two versions.

The graphics comparison comes to us courtesy of German site VideoGamesZone, who have uploaded a batch of screenshots over at their website.

There are nine images in total, with the PS3 version appearing at the top, Xbox 360 at the bottom. To view the images in HD, simply click the bottom right link which says ‘Bild in OriginalgrÃ¶ÃŸe’.

Personally, I dont see a lot of difference between the two platforms. Maybe I am just getting a color overload and can’t see anything properly – what do you reckon?

On a second glance, maybe there are slightly more jaggies on the PS3 version than Xbox 360 version, take the vehicle in picture two for an example of this.

Make sure you view these in full screen. Let us know your thoughts afterwards. 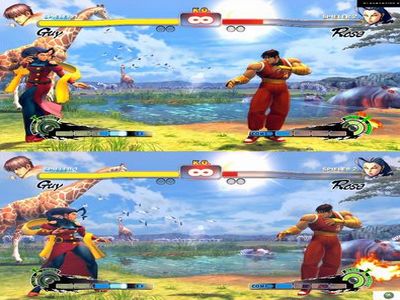