Gamers received news that they may have been waiting for recently, when Nintendo finally revealed the list of games that will be launched with its 3DS handheld gaming system. If you read my previous article here, you will know that Super Street Fighter IV 3D Edition was one of the games listed.

If you’re thinking of picking up a copy of the game along with the Nintendo 3DS, then you’ll be pleased to know that new screenshots, box art and some gameplay trailers have now made their way online. According to Stephen Totilo at kotaku.com, the game was demoed at the recent Nintendo World Event. 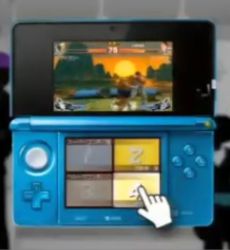 Street Fighter producer Yoshinori Ono was on hand at the event, and showed off both solo and multiplayer gameplay for the upcoming Super Street Fighter IV 3D Edition. As Stephen notes, the videos (seen here) don’t actually show you the graphics in the quality they are in real life.

If it’s the box art and screenshots you’re more interested in, then those can be seen in a recent article by Valay over at nintendoeverything.com. Are you looking forward to playing the Super Street Fighter IV 3D Edition game on your Nintendo 3DS?