Nintendo surprised those tuning into their E3 Direct broadcast with an exciting Megaman reveal for Super Smash Bros on the Wii U. Now, it gets somewhat stranger with the confirmation of another first-party based character who will be joining the roster. Remember the trainer from Wii Fit? She is going to be playable in Super Smash Bros as well.

We’re now surprised to see another first-party character coming to the game, after Nintendo’s recent statement where they said it would be very difficult to keep putting in various characters from other franchises. They called it a ‘very special case’ for it to happen, and it could mean that Megaman is only going to included among a very small group.

The next character to join the game is the Wii Fit trainer, as Nintendo has released a new gameplay video showing off a rather amusing promo featuring Link, Mario and Kirby. They attempt to emulate some of the exercises whilst watching a TV showing the trainer, but are then taken by surprise by the trainer herself who gives them a surprise slap to the chops. 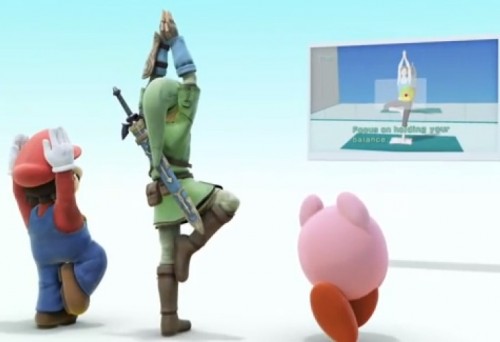 I think we speak on behalf of most Smash Bros fans by saying that this is a character that not many expected to see. We could think of a whole host of other first-party characters who would jump ahead of the list, but the Wii Fit trainer is definitely a surprise. Having said that, she actually looks very useful in battle.

Check out the trailer above and take a look for yourself. Nintendo has now released a collection of HD screenshots as well, showing more glimpses of the Wii Fit trainer with some of the other Smash Bros Wii U roster – including riding on Donkey Kong’s shoulder and doing the splits with Fox.

Now that we know Nintendo are opening to adding obscure characters into the game, who would you like to see added next?