We now have some good news to bring to those of you who are planning to pick up Super Smash Bros on Wii U. Some 3DS owners will be enjoying the Smash Bros demo at this moment, but it looks like one retailer has let slip the final Super Smash Bros Wii U release date.

The game is shaping up to be well worth the long wait and after the infamous leak in which the final roster was revealed, players should get a great mix of both Nintendo first-party characters and some third-party surprises as well.

Now, it looks like Super Smash Bros Wii U will be available to buy on November 21. This is significantly after the 3DS release which has already been confirmed to launch on October 3. 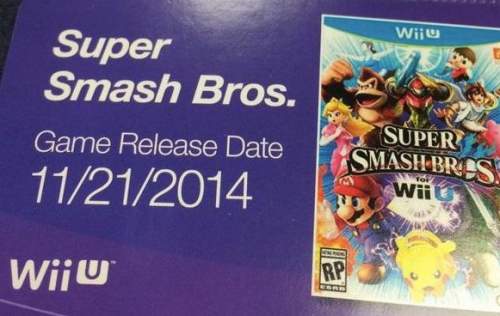 The November 21 date was revealed early by Nintendo France in a screenshot from a poster. As expected, the evidence has now been removed, but not before it was circulated all over social media spaces as you can see from the image above.

Nintendo France has since stated that the date was published ‘in error’, but of course it could be a case of backtracking after being rumbled when no official announcement from Japan or America has been unveiled.

Exciting times for Smash Bros fans. Are you excited about the Wii U version and the cross-play features with the 3DS version? For those that have already played the demo, let us know what you are most excited about so far.