If you’re looking forward to next year’s release of the Super Monkey Ball 3D game for the Nintendo 3DS console, then we have a bit of good news for you. Sega has recently released the very first trailer for the upcoming title, showcasing its gameplay.

According to Mike Jackson at computerandvideogames.com, all the signs point to Super Monkey Ball 3D being a traditional Monkey Ball game, with its Gongon, Baby, MeeMee and AiAi characters making a welcome return, along with another four unrevealed characters. 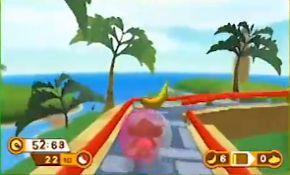 The game also enables you to compete in Monkey Race, a mode in which up to 4 players can jump into cars and use different items to obstruct the other players. You can even try Monkey Fight mode, where the players’ aim is to steal their opponents’ bananas.

You can view screenshots of the game — which show the different modes and levels — via another CVG article here and watch the trailer below. Do you like the looks of the Super Monkey Ball 3D game? Will you be buying the game next year?