Weekend football will include a Barclays Premier League match with Sunderland vs Stoke City kicking off at 3PM on Saturday, 4th of October. This match follows a narrow win for Stoke City against Newcastle United FC that saw Peter Crouch score, although Sunderland are now desperate for their own win to give them confidence to have a good BPL season.

If you have spent some time hands-on with FIFA 15, then you will notice the Match Day Live section as you can see within the screenshot below taken from FIFA 15 on PS4. This section features the next BPL game and allows you to play right from Match Day Live in a few short clicks. 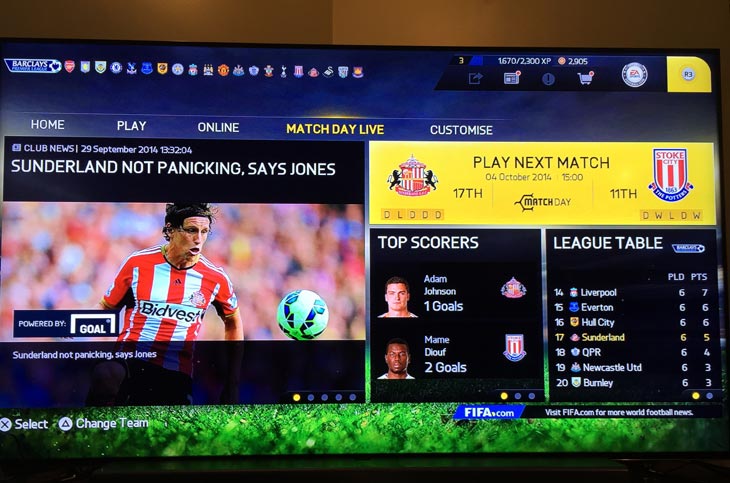 Those of you that follow the BPL closely will enjoy this feature and being able to play an upcoming match easily.

While Sunderland vs Stoke City is currently listed as the next BPL match, it is in fact one of a number of games taking place at 3PM tomorrow. The full list include Hull v Crystal Palace, Swansea v Newcastle, Liverpool v West Brom, and Leicester v Burnley as well all with the same 3PM start time.

You can also take a closer look at FIFA 15 player faces for Sunderland and Stoke within the video below this article. The screenshot seen below features Sunderland player Santiago Vergini, although within the footage you’ll see Jozy Altidore, Connor Wickham, Bojan Krkic, Mame Biram Diouf, Peter Crouch, and many more from both teams.

Do you like the quick access to playing an upcoming game via Match Day Live in FIFA 15? What’s your favourite new features and most hated changes in FIFA 15?