We recently spoke about some of the best weapons in Dragon Age Inquisition multiplayer that you could find. Now, it looks like we have picked up what could be the best one – hands down.

If you are playing the MP portion of the amazing game, you’ll know that the general concept of multiplayer is to keep grinding runs until you have enough gold to open large chests.

Picking out epic loot, or the purple cards are what you are aiming for as these are the items or weapons that will have unique abilities that no other weapon offers.

They are also the same weapons that are scattered throughout the single-player campaign. Now, whilst we were playing we managed to get the Sulevin Blade in Dragon Age Inquisition multiplayer. 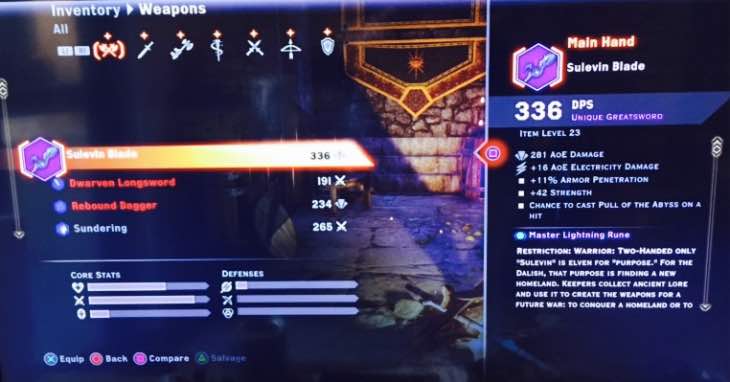 This two-handed greatsword has a fantastic design and could turn out to be the best sword in multiplayer alone, as we’re yet to find another weapon that can match it in terms of pure DPS.

Check out the stats above and see for yourself – this is just with a Master rune don’t forget. With a Superb rated rune the damage output is going to be even higher which is amazing for multiplayer.

It essentially turns our Reaver into a walking death machine. Notice the special ability on the Sulevin Blade which offers a chance to cast Pull of the Abyss – the same ability that is last to be unlocked as an Arcane Warrior.

What this does, is pull enemies into each other for around 1 second. When playing as the Reaver and using dragon rage, this is unbelievably useful – especially with rampage activated so you can regenerate your health at the same time.

Did we just pick up the best weapon in Dragon Age Inquisition multiplayer? If you have found another weapon, one handed or two that can beat this in DPS – share it with us below as we’d love to hear what you have picked up yourself.