We have some good news for those of you planning to get upcoming brawler Street Fighter X Tekken, as a leaked screenshot has confirmed one more character from the Street Fighter side that will be joining the current list of characters already listed for the game.

Without further ado, we can reveal that the character is none other than Sagat, the tall, kickboxing juggernaut who has featured in most of the Street Fighter games to date. His appearance was confirmed in a screenshot which was uploaded to Siliconera, check it out below. 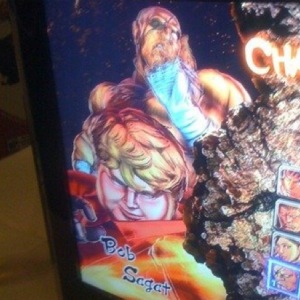 As you can see, he’s about to appear in a tag battle with Bob, who is one of the confirmed characters on the Tekken side, fans of Tekken 6 will be very familiar with him. Hopefully his arrival will start a barrage of reveals by Capcom, as we’re dying to see who comes next on the Tekken side, Heihachi is our bet.

Street Fighter X Tekken will feature tag gameplay for the first time, allowing gamers to execute tag moves during combo, similarly to what you can do in Mortal Kombat which was released on the Xbox 360 and PS3 recently.

Are you happy that Sagat is in the game? Who are your top remaining picks for the game?