The Consumer Electronics Show is generally known for its exciting tech unveils each year, and CES 2012 so far is no different. We have been informing you about all kinds of new smartphone debuts, but now we have something which will put a smile on the face of Android users.

That comes in the form of long awaited arrival of Street Fighter IV for Android. The game has been on iOS for a long time now, but at CES it was finally confirmed that not only will Android devices be getting a version of SFIV, but it will also be the best version too – renamed as Street Fighter IV HD.

It looks pretty spectacular as well. We can tell you that the game will be available first on January 19th as an exclusive app for the LG Spectrum, but will release on every other Android device via the Android Market sometime in May. Pricing has also been announced for SFIVHD as well, as it will cost gamers $12.99 to download.

We have what looks to be the first gameplay video for the game to show you now, courtesy of a CES 2012 clip filmed by Recombu. It confirms that there will be 14 characters available at launch and they are as follows – Dhalsim, Blanka, Chun Li, Ryu, E.Honda, Zangief, Guile, Ken, Abel, C.Viper, Dee Jay, Cammy, M.Bison and Sagat. If Capcom follows the same strategy as the iOS version of SFIV, then we expect more characters, costumes and other pieces to become available after launch.

Aside from the juicy first gameplay for SFIVHD on Android, we have also added a video showing how SFIV plays on iOS. There is obviously a significant upgrade in ‘crispness’ on the Android version, so it will be interesting to see if this remains an Android exclusive, or if it will turn up on the iOS App Store later on in the year.

Are you planning to buy this on Android? Capcom has often been criticized for bringing out ‘upgrades’ of their existing games, such as Ultimate Marvel Vs Capcom 3 and Super Street Fighter IV ‘Arcade Edition’, but we’ll let them off this time – it’s about time Android users joined in on the fun. 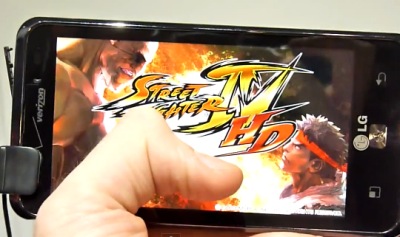