While the Apple product on everyone’s lips at the moment is the iPhone 5, the next version of the iPad has still seen its fair share of speculation and rumors. Just a couple of days ago we had reports that the release of the iPad 3 was brought forward to the end of January next year. Now today we have strange iPad 3 Ethernet rumors and prototype images to share with you.

An article on MacRumors is reporting on an image that has emerged of an alleged iPad 3 prototype on JailBreakPhone4u. You can see the image below and it shows a case that looks like an iPad case, but there are some differences. There is a bulge towards the bottom corner of the device, which appears to be for a port that is labeled Ethernet port because of the symbol.

The unit sizing hints at the usual widescreen display and there is no camera to be seen on the device. It is more likely to be a mock up or fake as it is highly unlikely that Apple would use an Ethernet port. The company would most likely use Thunderbolt or something smaller over Ethernet. And why would Apple consider removing the camera now there is FaceTime?

There would be many consumers not interested in an iPad without a camera now the latest version has them. It would be surprising also if the company decided to use the cumbersome Ethernet route to connect things. The unit in the image is either a fake Chinese mock up or a pre-iPad 2 prototype that was left in a bar or something.

What do you make of the image? 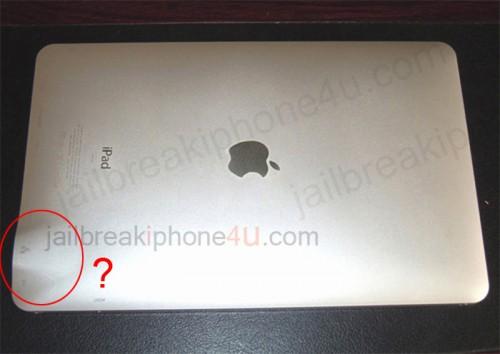