In light of the recent tragedy, the loss of Apple founder Steve Jobs, we have seen many tributes made in memory of the great innovator. Many have shared quotes from the man himself and some have honored him on social networks such as Twitter. One tribute in particular however, has seemingly turned a normal teenager from Hong Kong, into an Asian sensation overnight.

A student attending the Polytechnic University School of Design in Hong Kong, Jonathon Mak, nineteen, has come up with an intriguing symbolic, minimalist design that has also landed him a job as well as a load of commemorative merchandise using his design. The heart of the design is the highly recognizable Apple logo, although where the bite on the Apple would normally be, it features a silhouette of Steve Jobs.

According to Reuters the design not only symbolizes the death of Jobs but also his ‘lingering presence at the core of the company.’ The design spread all over the internet like a bad rash, creating a tsunami of clothes and, merchandise featuring the powerful logo as well as hundreds of thousands of posts.

Mak first created the logo to commemorate the day Jobs stepped down as CEO of Apple back in August, but the design had not made as much of an impact. He reposted the design after Jobs died and was shocked at the impact. He told Reuters that he was both terrified and excited about how crazy the day had been for him. He also explained that he was speechless when it came to getting the job offer. This is what he said about his design ‘It’s just this quiet realization that Apple is now missing a piece. It’s just kind of implying his absence.’

What do you think of the design? Feel free to share your thoughts and how you feel about the loss of Steve Jobs. 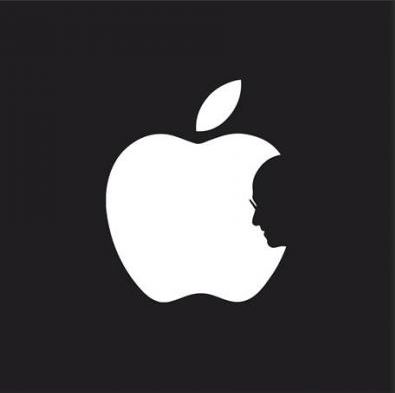