Over the past few weeks and months myself and a number of my collogues noticed just how emaciated Steve Jobs started to look — but he has never looked very healthy since his illness. So we were not surprised when Jobs announced that he was taking time off yet again, and as we reported yesterday it is Tim Cook who takes over as Apple CEO.

We have to wonder what sort of affect Steve Jobs medical leave will have on Apple stocks, although you have to admire that the announcement was made on a day when the stock market was closed in the U.S.? This means that shareholders would not react hastily so can digest the information for a day before Wall Street opens again. 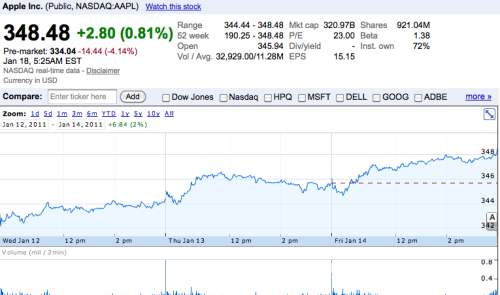 However, Heather Struck from Forbes believes that Apple’s stock could still slow down as a result — never before has a CEO had such a huge impact on a company. Stock markets were still open in other parts of the word when the news was announced, and share prices for Apple fell 8-10% in Europe. Struck makes a point of the last time Steve Jobs left Apple due to pancreatic cancer, shares fell by 50 percent.

An article that has been written on CNN Money believes that Tim Cook is the perfect guy to take over the helm, and that Apple has a positive 2011, one of the reasons is because of the recent Verizon iPhone announcement. However, it is the distant future that they worry about the most.

It is amazing how one man can affect the stock prices of a company, but it is ConceivablyTech that puts it best, when they say “Steve Jobs’ Health Belongs To Investors”. It is shocking, and we have to ask if there is any truth to it?

Keep an eye on Apple Stocks by visiting Google Finance.