We are now starting to get more reviews for the upcoming Bulletstorm, my colleague Alan Ng told you of some reviews earlier. Now we have another review and a video which shows the first ten minutes of the game.

David Brown of The Telegraph has written a detailed review of the game, and mentions that every kill you achieve you get awarded a score based on the style and flair you show while doing it. You have up to three weapons at your disposal at any one time, and these can be used with a leash which you can use to pull your foes towards you.

Action is nonstop and you hardly have the time to take a breath before the next wave of enemies start to attack you. All this will keep your attention levels up throughout the game, and you will be looking for new and inventive ways in making your kills. The problems that were mentioned in our earlier report about your team mates not being intelligent are mentioned. 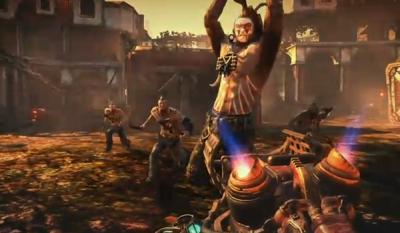 There was also an issue with some in-play loading problems, which may just prevent the game from being a true classic. The multiplayer part of the game came in for some praise, but would need some new maps to be added eventually to stop you from getting bored.
Below you can watch a video of the first ten minutes of the game. Are you planning on getting Bulletstorm? What do you think of the video?