We have a word of warning for those of you planning to pick up Star Wars The Old Republic later on in the year, especially if you consider yourself to be a big fan and are opting to pick up a special edition of the game instead.

You could have expected a Collector’s Edition of the game to come out along side the standard version, but one thing you will not expect is the alleged price tag as it has been revealed that gamers may have to fork out a near fortune in order to pick up the extra goodies.

As for the digital items you’ll get with the CE, they are rumored to include the following, as taken from a poster previewing the Collector’s Edition: Flare gun: Fire flares into the air, Training droid: Hovers at your side for combat assistance, HoloDancer: Project your own holographic dancer, HoloCam: Keep visual records of in-game adventures, STAP: Sleek and unique in-game vehicle, Exclusive Mouse Droid: Spunky droid to join your adventures, and an Exclusive Collector’s Edition store: Unique in-game vendor with a dynamic assortment of items.

While that vast list of bonuses is nothing short of mouthwatering, the same can hardly be said for the rumored price point – a cool $220 USD, or around 150 Euros for those of you living in Europe. No word on a potential UK price for the Collector’s Edition, but considering the US usually gets favored with price conversions, you just know it’s going to be bad.

We often say that Collector’s Editions only apply to the real die-hard fans of a particular game / franchise, but this is one instance where this couldn’t be more true, as the average gamer is definitely not going to pay over $150 for this, let alone the rumored $220. Are EA slightly mad in pricing this way over what gamers expect for this special edition? Of course there are going to be many individuals who will still buy the Collector’s Edition, but out of a matter of principle, it’s particularly worrying as a fellow gamer as these high priced tactics can only be bad news in terms of other companies seeing what EA has done and the fact that they may try to copy EA with future titles.

What are your thoughts on a potential $220 price point for the Collector’s Edition of Star Wars: The Old Republic – are you going to be buying it at the end of the year? 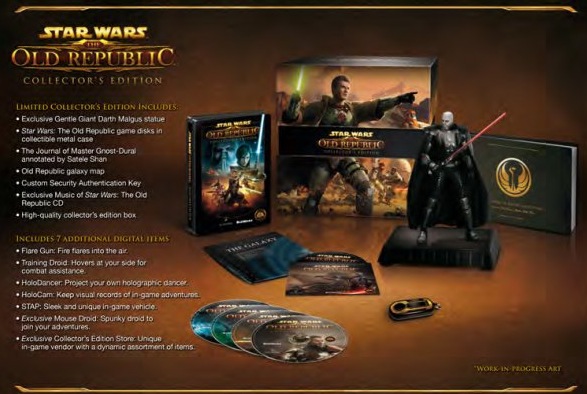