The latest Humble Bundle for February 2015 is possibly the best one that we have seen so far since the charity-based games package service first started.

If you haven’t heard, Humble Bundle is now offering a Star Wars package, featuring some of the best Star Wars games ever released.

As you can imagine, reception has been amazing so far with the creators confirming that in the space of a few days, $2 million has already been generated – some of which will go to Unicef. 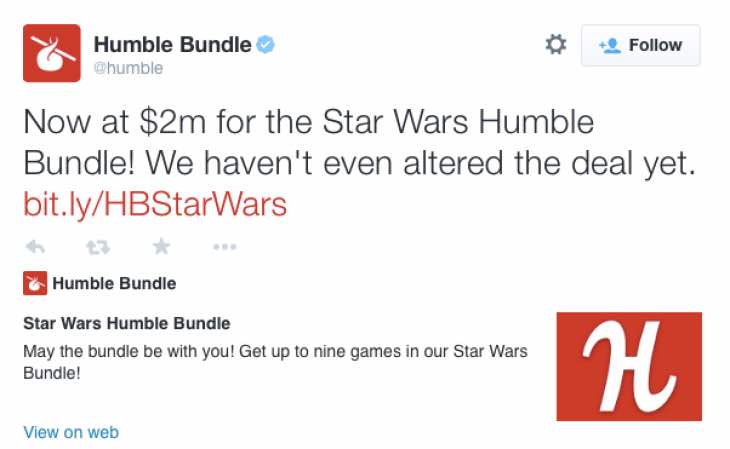 Some of the games on offer include Star Wars Knights of the Old Republic, Dark Forces, The Force Unleashed II, Star Wars Battlefront II and Republic Commando.

You can pay as little as $1 to get the first three games, but you’ll need to spend over $12 or over $12 if you want to get the rest of the titles – either way, there’s massive savings to be had regardless.

The creators should be updating the Star Wars Humble Bundle games list with even more Star Wars titles to play. Some of the in demand games that we have seen requested are Dark Forces II, X-Wing, Tie Fighter and Rogue Squadron.

Are you waiting for the updated list, if so what games would you like to see added to the collection?