It looks like we are going to be in for an anxious wait and it is going to depend entirely on the discretion of Microsoft and Sony.

Store updates will happen on Tuesday as normal, but remember the beta will be available on Thursday so this is going to be a unique content release on both respective stores.

One user asked for a specific time, but was told by EA that times will vary depending on platform and more importantly – region. 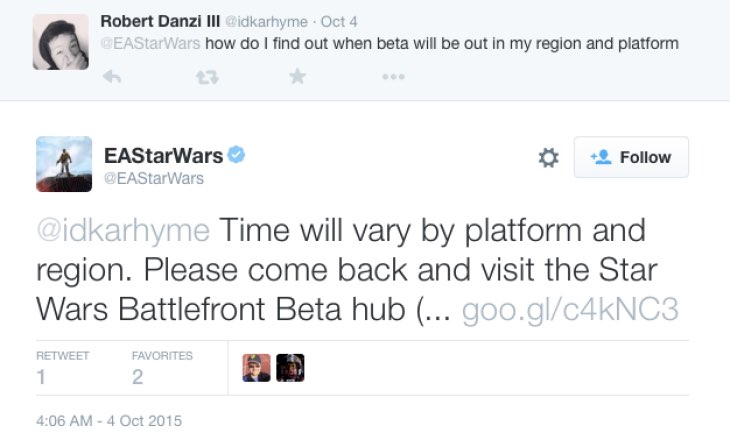 That means that they don’t know themselves and it is most likely up to Sony and Microsoft for when the content will appear on the store for download.

Our advice is to check the web stores first before you check your consoles. Content always appears first before they update on console so that will be the way to install the massive 7GB file before others and get a head start.

As for the Star Wars Battlefront PC pre-load, we can confirm that this will be available this Wednesday at 1am Pacific, 4am Eastern Time and 9am UK time via Origin.

If we happen to get an exact time from EA before Thursday, we will update this for you with the latest information.

Are you excited about the imminent release of the beta? Remember that it’s open to everyone – no key needed!

Update: The beta is going to start at 8am Pacific Time, as confirmed by Community Manager Mathew Everett. Spread the word and prepare yourselves!