Everyone is talking about Star Wars Battlefront 2 now, with developers DICE having made a game changing decision to the Battlefront 2 monetisation system in the game, on the same day of the official Battlefront 2 release date.

The game has been available to play on Early Access on Xbox One via EA Access and also Origin Early Access on PC since November 9. However, this could be the first time in history that we have seen such a major change to a AAA title on the day of the game’s launch.

That is exactly what EA and DICE have done though, as you can see from the official statement below which we’re sure will shock many of you – in a good way of course. 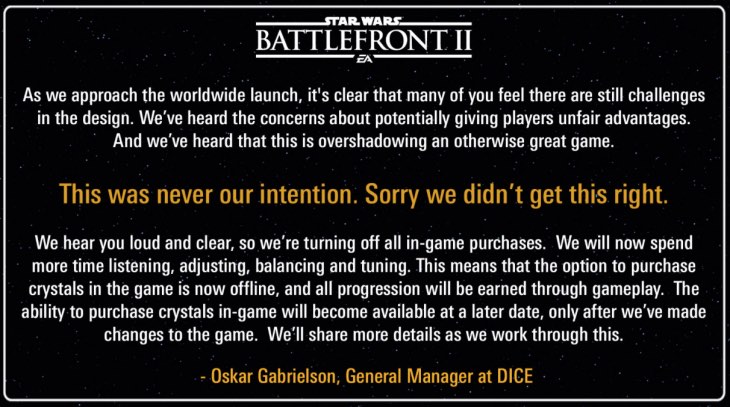 For those that haven’t been keeping up with the game’s progress since beta and Early Access, there has been unprecedented criticism over the ability to buy in-game items with crystals using real money, that many players feel gives an unfair advantages to non-payers.

It has prompted a huge debate on social media, including here on Reddit which you can see an EA developer’s reply getting over half a million downvotes in the space of a few days – another piece of history there?

You can see the full statement over on EA’s website here, but just give us your reaction to this. Could this possibly now pave the way for other controversial monetisation practises to be tweaked in other high profile games?

Give us your thoughts on this and on a wider scale, name other games which you feel could benefit from EA’s decision here to totally scrap the monetisation system before launch, as a result of gamer feedback.