If you are playing FIFA 16, we wanted to give you a quick heads-up that there is a new FIFA 16 tournament for St Patrick’s Day. This is worth your effort as EA has decided to give a big coin prize for those that manage to win.

Even better is that there is also an offline version of the tournament, as well as online. If you win the offline tournament you can earn yourself 10,000 coins as a first win prize, while those good enough to win online can take home a jackpot of 15,000 coins.

That is a very nice reward you will agree, but the restrictions are the only negative point. You’ll need 15 players in your squad from the Republic of Ireland, so hopefully you’ll already have players such as Robbie Keane, Coleman, McGeady and Shane Long in your MyClub already. 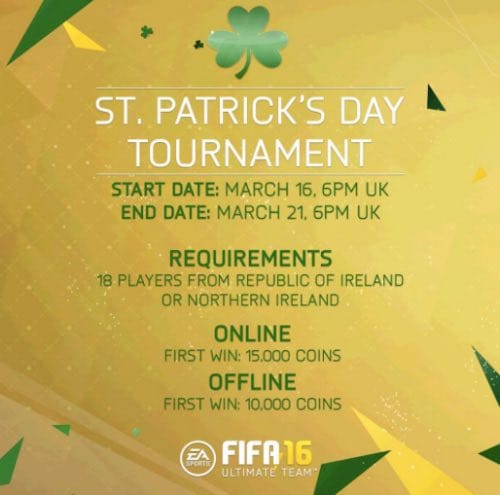 The tournament is open right now and will be valid until March 21 at 6PM UK time. There’s also the chance to get special green cards featuring St Patrick’s Day versions of Irish players, so look out for them in packs too.

How are you getting on with the new tournament today, already won? Let us know in the comments below!