Sometimes we think that people underestimate how difference firmware versions can make to a device’s everyday performance, one thing which has truly showed this is the upcoming firmware update for the Sprint Nexus S 4G, not only does this improve speakerphone quality, WiFi connectivity and add TTY support but it also greatly improves WiMAX performance, and we mean greatly.

Currently if you have the latest software installed on your Sprint Nexus S 4G you will running Android 2.3.4 (build number: GRJ22), we are told that a new update is still being finalized, however Engadget got to try it out, this brings the Nexus S 4G to Android 2.3.5 (build number GRJ90). When this update arrives, which is currently a mystery, it will be rolled-out over-the-air, your smartphone should receive a notification, however you may have to go into settings\about phone and manually check for an update if nothing ever shows up.

Below we have embedded two screenshots showing two Nexus S 4G’s running different firmware versions. You clearly see that in identical tests (in terms of smartphone location and time) the newer firmware seriously performed the older one. Sometimes the results don’t differ massively, however at times you can almost see twice as fast download speeds and slightly increased upload speeds, this proves how much of a performance increase this will give the Nexus S 4G when carrying out mobile data-intensive tasks. 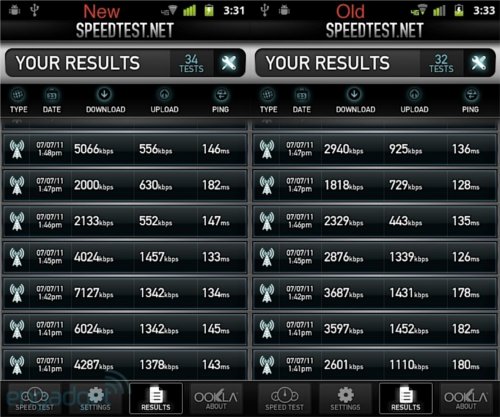 If you are a doubter we have also embedded a video at the end of this post, it clearly shows that there is no active WiFi connection during the test and also at the end of the video clarifies which firmware version is running on each smartphone, in fact the only thing which we don’t find out is exactly when this update will be rolled out over Sprint’s airwaves.

Engadget’s Myriam Joire says that she noticed speed increases in both New York and San Francisco, this suggests that you should notice an improvement no-matter where in the U.S. you are, as let’s face it Sprint’s signal in these locales is not exactly perfect.

When we hear that this firmware update goes live we will keep you posted, if you are reading this brief article having installed Android 2.3.5 on your Nexus S 4G we would love to hear from you as to whether you have noticed improved WiMAX speeds since installing the update, if so, leave us a comment below.