Who said that the PS3 rumors about Splinter Cell: Conviction were dead? The latest news is that a lead software engineer at Ubisoft has listed the game for release on PS3 on his LinkedIn profile.

As reported from Playstation Lifestyle, this is just the latest news following months of ongoing speculation surrounding a PS3 release for the game.

Ubisoft’s Marc Demers was the unlucky chap to reveal the details, although he has since removed the PS3 listing from his profile. Thanks to PS Lifestyle though, we can show you what it originally displayed below.

At the moment, SC: Conviction is scheduled to release for Xbox 360 and PC only, on April 16th in the UK. Do you think the game is just under timed exclusivity by Microsoft? 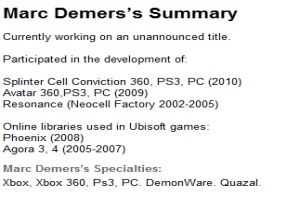