We’ve already brought you news about the Splinter Cell Compilation coming exclusively to the PlayStation 3, and now we have news about the upcoming Nintendo 3DS title, Splinter Cell: Chaos Theory. Ubisoft has recently released a few screens for the 2011 re-release.

According to a recent article by Dan Lee over on thesixthaxis.com website, the upcoming game — which debuted on the GameCube, Xbox and PS2 back in 2005 – sees the main character Sam Fisher on the hunt for the “Mass Kernels,” who have launched an attack on America’s infrastructure. 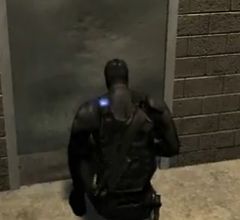 The game will not only take advantage of the 3D effects that are offered on the Nintendo 3DS, but will also use the mission objective system that was featured in the Splinter Cell Conviction title. By the looks of things, gamers won’t have to wait too long until the new game is launched.

Although we don’t exactly know a specific release date for the Splinter Cell: Chaos Theory 3DS game, Darren Allan over at techwatch.co.uk reports that it will be arriving sometime in March 2011. Will you be buying the upcoming Splinter Cell remake?