If you’ve already downloaded a video editing app for your iOS device, the chances are it could well be Apple’s iOS version of the iMovie app. However, there now appears to be a great alternative called Splice Video Editor, which iOS users can download for free.

As Arvin Dang over at lifehacker.com reports, the Splice Video Editor app comes with many of the same features that are included in the iMovie app, but comes without the cost. If you would prefer the ad-free version of Splice, then it will cost you just $1.99. 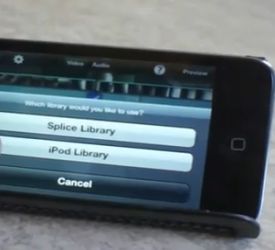 The Splice Video Editor app allows users to clip, cut and edit videos, as well as adding sound effects or background music. This could be a track selected from the list that comes with the app or from your iPod Touch, iPad or iPhone’s music library.

Some of the other features include a time-saving multi-photo/video picker, the ability to add visual effects such as slow motion or fast forward to your video and a simple, easy to use drag-and-drop feature. As noted on the itunes.apple.com website, the app requires iOS 4.2 or later.

You can read more about the Splice Video Editor app via the link here. Version 2.1.11 is a minor update that is said to have fixed a few issues that some users were previously experiencing.